How pesticides affect your health and the environment

Last week I published an article on the differences between natural and organic skincare products, one of them being that natural products may use ingredients from farms relying heavily on pesticides.

I was watching today a very informative video from a French national newspaper about pesticides and thought it would be interesting to talk about the effects of these widely used products on health and the environment. 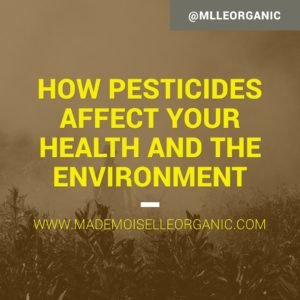 “Pesticides” refer to any chemical intended to prevent, repel, lessen or destroy pests. They are classified as herbicides, fungicides or insecticides.

Pesticides have been used for many centuries and have played a big role in protecting crops at times of famine, and also killing disease carriers such as mosquitoes. However,  in the last 50 years, overall pesticide use has increased massively, while studies have highlighted some of the side effects on human health and the environment, which led to some pesticides being banned from certain countries.

What are the side effects of pesticides on the environment?

Many pesticides contain volatile compounds, which evaporate from fields and combine with nitrogen oxides to produce ozone, a greenhouse gas. In the US, pesticide use accounts for about 6 percent of total ozone levels 1.

The use of pesticides also decreases the general biodiversity in the soil and affects soil conservation, thus possibly reducing soil fertility.

Pesticides pollute water streams, groundwater and rainwater. In the United States, pesticides were found to pollute over 90% of streams in developed areas sampled in a study by the US Geological Survey. Pesticides were also identified in fish tissues and sediments. 2 Similar results were obtained in France. 3

Persistent organic pollutants (POPs) are compounds that resist degradation and thus remain in the environment for years (sometimes over a decade). Some pesticides are considered POPs and can have the ability to volatilize and travel great distances through the atmosphere to become deposited in remote regions.

Pesticides are also a threat to biodiversity because they often reach a destination other than their target species. 4 They kill beneficial species such as natural enemies of pests and increase the chances of development of pest resistance to pesticides. 5 They also can eliminate some animals’ essential food sources, causing the animals to relocate, change their diet or starve. Residues can travel up the food chain: for example, birds can be harmed when they eat insects that have consumed pesticides (a process known as “bioaccumulation”). 6 The Fish and Wildlife Service estimates that 72 million birds are killed by pesticides in the United States each year. 7 Almost all of the 1,700 most endangered plants and animals in the US are also likely to be harmed by two widely used pesticides, according to an analysis by the Environmental Protection Agency (EPA) 8. In Europe, average breeding populations of farmland birds in 2006 were about 50% lower than in 1980, a decline caused by agricultural intensification and excessive use of pesticides and fertilizers. 9

One mouthful in three of the foods we eat directly or indirectly depends on pollination by honeybees. Crops from nuts to vegetables and as diverse as alfalfa, apple, cantaloupe, cranberry, pumpkin, and sunflower all require pollinating by honey bees. Furthermore, for fruit and nut crops, pollination can be a grower’s only real chance to increase yield. The value of honeybee pollination to U.S. agriculture is estimated to more than $14 billion annually. 10

Insecticides are, by their nature, toxic to bees. Their toxins also infiltrate plants’ nectar and pollen. This is one of the main causes behind a massive decline in the number of honeybee colonies. For instance, in the US, the number of managed honeybee colonies has fallen from 6 million in 1947 to just 2.5 million today. 11

Following recent studies indicating acute risks of certain insecticides for bees, the European Commission restricted significantly their use. 12 However, these insecticides are still in use in many other countries.

What are the side effects of pesticides on human health?

Pesticides can enter the body through eating, drinking, breathing and absorption through the skin. 13

Chronic, low-level exposures can also affect the skin, eyes, nervous system, cardiovascular system, respiratory system, gastrointestinal tract and liver, kidneys, reproductive system and blood. 13 In 2015, the International Agency for Research on Cancer has stated that one of the most common used pesticides in the world, the glyphosate, is “probably carcinogenic to humans”. 19

According to the Wolrd Health Organization (WHO), “severe pesticides poisoning can cause respiratory distress, convulsions, coma and death. It is estimated that there are between one million and five million pesticide poisonings each year, resulting in 20 thousand deaths worldwide”.  13

So far, researchers have difficulties sorting out exactly which pesticides are linked to which cancers. Plus, it is difficult to assess long-term effects.

According to WHO, « Children are more vulnerable to the effects of pesticides because of their smaller size and hence greater exposure (on a milligram per kilogram body weight basis), different metabolism and still developing internal organs.” 13

This is a global concern in developing countries where many children work in agriculture.

In particular, recent research has examined the effect that some pesticides may have on the endocrine (hormone) systems of children. Such endocrine disrupting chemicals can mimic or inhibit normal hormones, which may affect the physical and neurological development of children and adolescents.  13

Where can you find pesticides and their residues?

In the environment, pesticides have been identified in water, air, soils and rainwater. 25

From food to drinking water, textile and cosmetics, pesticides residues have also been found in many products. They are usually present in very small quantities but, just like for animals, they accumulate in the body (via “bioaccumulation”) and POPs can remain there for many years.

According to more than 150 studies conducted in 61 countries, pesticide residues have been found in human brains, blood, breast milk and sperm. 26

Regulation on pesticides differs from country to country because studies’ credibility and ecological relevance are often questioned by legislators. For instance, a pesticide called “Atrazin” has been banned in Europe since 2003 because of its persistent groundwater contamination but is still widely used in other countries such as the US and Australia. According to some studies, it is a possible cause of several types of cancer and endocrine disruptor. 27

How to avoid pesticides?

Are organic products 100% free of pesticides?

Short answer is no. Because of the volatility of pesticides, organic crops can be contaminated by nearby farms that use pesticides. Just like rainwater or drinking water is contaminated. However, the quantity of pesticides found in organic products is minimal compared to other products. Plus, organic farms adopt a sustainable approach which is better for the environment and our planet.

Remember that the use of pesticides is one of the main points of difference between natural and organic skincare and cosmetics. Read this article for more info.

Pesticides are necessary in times of famine and they also do kill disease carriers such as mosquitoes. BUT they are over-used in a very unsustainable way, which is bad for the future of crops and agriculture (poor soil fertility, less pollination by bees…), global pollution of soils, water and air, even in areas where no pesticides are used (due to their high volatility), biodiversity (animal poisoning, reproductivity concerns…) and human health (via bioaccumulation of persistent organic pollutants in our body, presence in drinking water, food, cosmetics and textile, limited research on long-term effects of pesticides accumulation, and recognised effects such as Parkinson’s disease).

All these concerns are even more worrying in developing countries, where children are exposed to pesticides while working in agricultural fields, and where the technology to conduct tests and protect workers from pesticide poisoning is missing.

In the end, knowing that almost half of the world’s food is thrown away 28, do we need to pollute our planet and bodies that much to produce a large quantity of food we may never eat?

I buy organic because I believe there is a better way. Because I care about my health and the health of my future children. And because I want to add my voice to the fight for a more sustainable (and responsible) world.

Until next time, keep well ^^

Make your own skincare! Click the below image for a FREE online course to get started 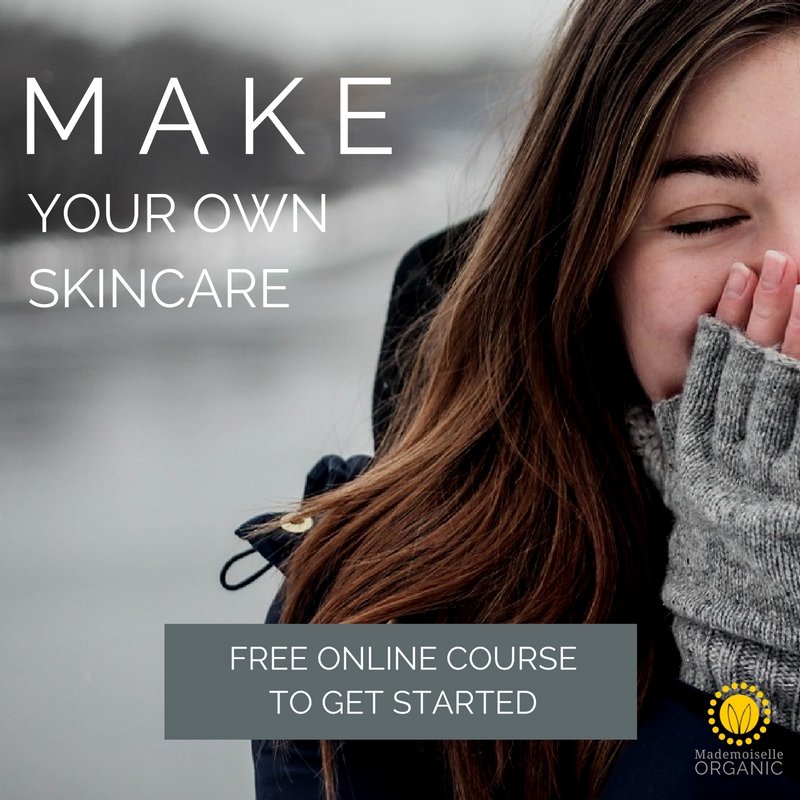 2 thoughts on “How pesticides affect your health and the environment”

This website uses cookies to improve your experience while you navigate through the website. Out of these, the cookies that are categorized as necessary are stored on your browser as they are essential for the working of basic functionalities of the website. We also use third-party cookies that help us analyze and understand how you use this website. These cookies will be stored in your browser only with your consent. You also have the option to opt-out of these cookies. But opting out of some of these cookies may affect your browsing experience.
Necessary Always Enabled
Necessary cookies are absolutely essential for the website to function properly. This category only includes cookies that ensures basic functionalities and security features of the website. These cookies do not store any personal information.
Non-necessary
Any cookies that may not be particularly necessary for the website to function and is used specifically to collect user personal data via analytics, ads, other embedded contents are termed as non-necessary cookies. It is mandatory to procure user consent prior to running these cookies on your website.
SAVE & ACCEPT